It was a disaster of epic proportions. It is estimated that anywhere from 20 to 100 million people were killed worldwide. And now the remains of an aristocrat, buried in a churchyard in Yorkshire, are making their way to the surface some 90 years later in hopes of preventing a repeat of the disaster.

The 1918 flu pandemic, also known as the Spanish Flu, first appeared in Fort Riley, Kansas on March 4, 1918. By August 1918, a more deadly strain appeared simultaneously in Freetown, Sierra Leone, Brest, France, and Boston, Massachusetts. The flu wreaked havoc across the world until June of 1920.

The BBC news has been tracking the story (Feb 2007 article, Video, 2008 article) 2008 story of the scientific research that’s being conducted in hopes of thwarting similar calamties in the future. That research is reaching a climax with the authorization by the Diocese of York to exhume the body of one of the victims of the pandemic, Yorkshire landowner Sir Mark Sykes, who died in France from the flu in 1919.

There are only five known tissue samples worldwide from victims of the pandemic, and there is a desperate need for more if they are to further their research and prevent future victims of similar flu strains.

But why have scientists set their sites on Sir Mark? Records of Sir Mark’s funeral at St. Mary’s Church, Sledmere indicate that he was buried in a lead coffin which scientists hope preserved traces of the virus.

So many of our ancestors were dramatically affected by the 1918 Pandemic. In Genealogy Gems Podcast Episode 50, we came to know one of the victims of 1918, Alice McManus, the great grandmother of Genealogy Gems Premium Member Sue Torguson. Like so many of the flu’s victims, Alice was a vibrant, healthy adult woman when she was struck down, leaving behind her sixth month old daughter. 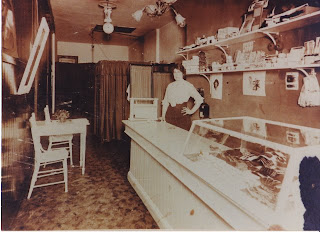 Watch the BBC video to learn more about the man who is contributing to the health of his descendants and the world 90 years after his death, and the scientists working on this important project.

Do you have ancestors that were struck down by the Spanish Flu? What were the lasting affects on your family?

I was very interested in finding your article pertaining to the epidemic flu of 1918. I would love for you to read my article posted on my blog, Genealogy Traces, about my grandmother's sister who died in Sandpoint, Idaho, in 1918 from the flu. I am also adding Genealogy Gems News to my list of favorite links! Thanks so much for bringing my attention to this new discovery.