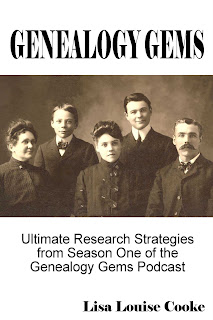 I just got word from my publisher that they are offering a 25% discount today only on my book Genealogy Gems: Ultimate Research Strategies.

You can get it here - just enter the coupon code:
CYBERBOOKS
(The online payment system is completely secure.)

Also, today is the last day for the lowest price of the year on Genealogy Gems Premium Annual Membership - 30% off
You can get it here - enter the coupon code: SPECIAL

Posted by Lisa Louise Cooke at 11:40 AM No comments: 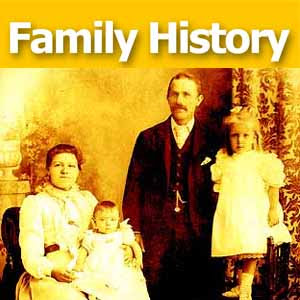 When I found my husband's long lost cousin, we were thrilled when the day came when she arrived at our home. We were excited to get caught up, and swap family stories.
We couldn't have imagined that along with her smiling face, she would arrive on our doorstep with a tattered old moving box in her arms full of 19th century photos, memorabilia, and even a family bible!
Would you like to find a lost cousin? It may be easier than you think.
In Episode 46 of the Family History: Genealogy Made Easy podcast Peter Calver, President & Founder of the Lost Cousins web site explains how his site can match you up with lost cousins in an incredibly accurate way. No more throwing your tree out there and seeing what sticks to it's branches!
Listen to Episode 46, and share your stories of lost cousins found:
Posted by Lisa Louise Cooke at 1:02 PM 1 comment:

Here are the Latest Free Records at FamilySearch

The states of Texas, Ohio, and Iowa were added to the U.S. 1920 Census at FamilySearch’s Record Search pilot. Spanish researchers will enjoy new civil registration images for the provinces of Cadiz, Granada, Malaga, Spain, from 1837–1870. Over 500,000 new digital images were added to the Brazil Catholic Church Records Collection. These birth, marriage, and death records are from the states of Bahia, Menas Gerais, Paraná, Pará, Pernambuco, and Sao Paolo. Over 400,000 Massachusetts marriage records were added for the period 1906 to 1915, and Catholic baptismal records were added for the Distrito Federal of Mexico.

Footnote.com announced today that they have released "the Native American Collection" of historical records. Footnote has been partnering with the National Archives and the Allen County Library on the project which includes:

The new Native American "microsite" provides an interactive environment where members can search,

Footnote’s Native American microsite creates an interactive environment where members can search, annotate and add comments to the original documents. In addition there are pages for many of the Native American tribes that include historical events on a timeline and map, a photo gallery, stories and comments added by the community.

“Much like putting a puzzle together, Footnote.com brings pieces together in the form of historical documents to create a more vibrant picture of the events and people of the past,” says Justin Schroepfer, Marketing Director at Footnote.com. “Together with the online community we are discovering a side of history that you cannot find in text books.”

Footnote.com also provides a free service where visitors can create their own web pages for their Native American family.

Posted by Lisa Louise Cooke at 8:01 PM No comments:

Here's some great news from the folks at RootsMagic. Tell all your friends that they can start building their family tree for free!

Essential Features for Everyone

“Many of our users have told us that they have friends and family members who are interested in getting started in family history but aren’t ready to invest in a more comprehensive package like RootsMagic,” said Bruce Buzbee, president. “RootsMagic Essentials gives them the features they need to start researching and recording their family tree at a price that can’t be beat—free!”

RootsMagic Essentials shares many of the same features with the full RootsMagic software including clean and friendly screens, the ability to add an unlimited number of people and events, pictures and media management, the SourceWizard to write your source citations for you, powerful merging and clean-up tools, dozens of reports and charts, support for international character sets, FamilySearch integration, and the ability to share data with other people and software programs. The full version of RootsMagic is available for purchase and includes features not available in RootsMagic Essentials.

For over 20 years, RootsMagic, Inc. has been creating computer software with a special purpose—to unite families. One of our earliest products- the popular "Family Origins" software, introduced thousands of people to the joy and excitement of family history.

That tradition continues today with "RootsMagic", our award-winning genealogy software which makes researching, organizing, and sharing your family history fun and easy. "Personal Historian" will help you easily write and preserve your life stories. "Family Reunion Organizer" takes the headaches out of planning those important get-togethers. And "Family Atlas" creates beautiful and educational geographic maps of your family history.

Get Your Needles Ready! Eisenhower Heritage Behind Veterans Day Quilts of Valor Challenge

Because I'm a lucky recipient of heritage quilts handed down in my family, this announcement from the folks at the Eisenhower Presidential Library and Museum immediately caught my eye. It's about a wonderful opportunity to lovingly piece together a tribute to the service of our brave men and women that they can pass down to future generations.

"The Eisenhower Presidential Library and Museum is pleased to announce its first ever Annual Veterans Day Quilts of Valor Challenge. Participants will have nearly a year to work on their quilts for submission. Quilts will be collected and put on display in time for Veterans Day 2010.

In partnership with the Quilts of Valor Foundation and the Kansas Quilts of Valor, the quilts will be distributed to wounded service men and women. Distribution points will include military and VA hospitals, CVN-69 USS Dwight D. Eisenhower and other veteran organizations.

This challenge is being organized by Jan Hottman, staff member at the Eisenhower Presidential Library and Museum. "Not only were quilts and blankets made on the homefront for troops during WWII, but support and concern for the troops was paramount to Eisenhower. This is one more way for us to carry on the legacy of the 5-star General and 34th President of the United States," states Hottman. "The Eisenhower boys helped their mother, Ida Stover Eisenhower, make quilts for the family while growing up in Abilene. He would understand the comfort and love of something made by hand."

The Quilts of Valor organization provides heirloom quality quilts for men and women who have been injured serving our country. They deserve to have a quilt that will be handed down in their families. Think of the quilt as a special hug from you to them. The quilts may be pieced, quilted, and labeled by a single person, group, or school. If you are not able to complete the quilting, you may submit the top with backing and label to be completed by volunteers.

Quilt entries should be a minimum size of 50" x 60" and include matching binding and backing. The backing should be a surplus of 4" on all four sides of the top. Standard/twin size pillowcases made from extra material should also be included. These pillowcases can later be used for storing the QOV."

What: A quilt challenge to make an heirloom quilt with pillowcase for every injured military personnel. A journal started by the quilter, to be completed by the person receiving the quilt, may also be included. The quilts can be made by individuals or groups, and you can make as many as you wish.

When: Starting November 11, 2009. Quilts, with pillowcases, and optional journals can be brought or mailed to the Eisenhower Presidential Library and Museum by October 22, 2010. The quilts will be on display from November 8-29, 2010. They will then be distributed to military and VA hospitals.

Posted by Lisa Louise Cooke at 1:42 PM No comments:

Imagine getting opportunity to move into the home your spouse had grown up in only to discover that your ancestors had roamed its halls centuries before! That's what happened to Lori Colby, and her intriguing story unfolds in the article "This Old House: Ancestral Home Gives Sense of History" on the Wicked Local Bolton, Massachusetts news web site.

You can't help but envision the children over the decades playing hide and seek in the secret nooks and crannies in the home that Lori describes. And I found myself envious of the gloriously large brick fireplace featured in the photo that accompanies the article. (be sure to click on it to get the full view!)

Have you or do you live an an old house? Or better yet, and ancestral home? Tell us about your trap doors, and special findings in the Comments section.

I'll start: We once owned a large old Victorian home in Washington State. Down in the basement was a wall of very unusual book shelves...too shallow and small for average size books. On them remained one small book with the handwritten name "Andrus" inside the front cover. A bit of research at the public library revealed the house had once been owned by Colonel Andrus famous for his involvement in the Nuremberg trials. And soon the mystery was solved: the bookshelves had been custom built by the Colonel to house his personal collection of small diary books in which he took copious notes on the trials.
Posted by Lisa Louise Cooke at 4:28 PM 1 comment:

In Episode 74 of The Genealogy Gems Podcast the founder of the hugely popular DeadFred web site Joe Bott shares behind the scenes stories that will amaze you.
In fact I was so inspired by one story that I tracked down the lucky genealogist who found a photograph of an ancestor (you gotta hear this story for yourself to believe it!) to get the full scoop.

All of these tales of genealogical serendipity are not confined to "other genealogists." With a bit of patience and a dose of luck you too could find a gem on the DeadFred web site.

(BTW - you'll hear from a surprise "guest" on this episode as well!)

Listen now to Genealogy Gems Podcast Episode 74 and check out the show notes for photos and more information.

And be sure and sign up for the free Genealogy Gems e-Newsletter to stay on top of all the new episodes and extra research gems.
Posted by Lisa Louise Cooke at 7:30 AM No comments: