PROVO, Utah, July 29, 2010 (GLOBE NEWSWIRE) -- Ancestry.com Inc.(ACOM 18.43, -0.10, -0.54%), the world's largest online family history resource, today reported financial results for the quarter ended June 30, 2010.
"Greater than anticipated subscriber additions drove impressive performance in the quarter and boosted our revenue and EBITDA expectations for the full year," said Tim Sullivan, Chief Executive Officer of Ancestry.com. "It's particularly noteworthy that retention rates and customer behavior trends are remaining consistent despite the rapid subscriber growth in the first half of 2010. As we move forward, we will continue our focus on building awareness of the family history category, improving the customer experience and adding important content collections to Ancestry.com."
Ancestry.com Web Sites Highlights
-- Subscribers totaled 1,311,000 as of June 30, 2010, a 32% increase over
Second Quarter 2010 Financial Highlights
Recent Business Highlights
Business Outlook
The Company's financial and operating expectations for the third quarter and full year 2010 are as follows:
Third Quarter 2010
Full Year 2010
About Ancestry.com
Ancestry.com Inc. (ACOM 18.43, -0.10, -0.54%) is the world's largest online family history resource, with more than one million paying subscribers. More than 5 billion records have been added to the site in the past 13 years. Ancestry users have created more than 18 million family trees containing over 1.8 billion profiles. Ancestry.com has local Web sites directed at nine countries, including its flagship Web site atwww.ancestry.com.
Posted by Lisa Louise Cooke at 4:39 PM No comments:

There are some neat upcoming events coming soon from the folks at Family Tree Magazine:

Online genealogy store ShopFamilyTree.com is giving away a $250 shopping spree to one lucky family history buff.  The Genealogy Giveaway Sweepstakes runs through August 31, 2010, and contestants may enter here every day to increase their chances of winning.

The winner will be able to choose from hundreds of genealogy books, CDs, and DVDs, including:
The randomly selected winner will be announced in early September.  Please note that the sweepstakes is open to all US residents 18 or older.  Complete sweepstakes rules can be viewed here.

For the first time ever, Family Tree Magazine is hosting a no-holds-barred Q and A session with its readers!  Sign up for Ask the Editors: Family Tree Magazine Answers Your Questions, a free, hour-long webinar, to meet the editors of your favorite genealogy magazine and get a behind-the-scenes tour.  Ask us any question you have about genealogy, research methods or Family Tree Magazine.  While we can't guarantee resolutions to research problems, we'll try to tackle anything you throw our way during the session on Wednesday, August 11, at 7 p.m. Eastern.

Hope to see you in class!

Posted by Lisa Louise Cooke at 4:33 PM No comments:

What do you not know that you wish you knew, but you've lost hope that you ever will? An ancestor's burial location, date of birth or village of origin? For Craig Manson author of the GeneaBlogie blog it was the name of his great great grandfather.
"I wanted people to know that these things are possible...I want to inspire people not to give up on things that that they think are absolutely unknowable. And that's what I thought. I thought the name of my great great grandfather was absolutely unknowable, and I would never learn it. But I did eventually."

Listen to the newest episode #93 of The Genealogy Gems Podcast to more about what Craig has to say about how he locates new information on a regular basis to  keep learning those "knowable" genealogical facts about his family.

Posted by Lisa Louise Cooke at 3:22 PM No comments: 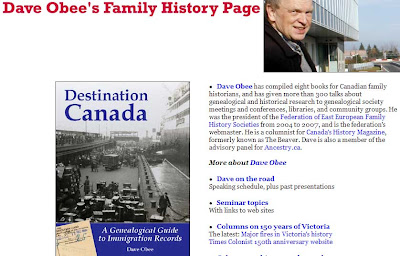 Dave Obee was just a few yards away when I called him on his cell phone for our scheduled interview for The Genealogy Gems Podcast.  But in the sea of family historians at the recent Ontario Genealogy Society Conference he might have well been miles away.  Thank goodness for cell phones!

I didn't want to miss my chance to speak with one of the most in demand Canadian speakers around.  With more than 300 genealogy talks under his belt and eight books to his credit, it's safe to safe Obee has things to say that genealogists everywhere will want and need to hear.

Even if you don't have Canadian ancestors you are going to want to tune in.  It's a wonderful overview of Canada's vibrant history, and refresher of good solid genealogical strategies and principles.  And don't miss Dave Obee's book Destination Canada

- a must read for genealogists researching ancestor's that immigrated to or through Canada.

Listen to Episode 92 now (below), which also includes genealogy news, and listener email questions!  Who knows, you may just hear the answer you've been looking for!