Nerd Alert! Genealogy is Getting Remixed into new TV Series 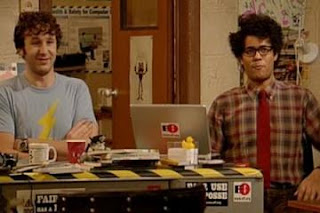 What could be better than a "nerd" from the fab British Comedy The IT Crowd and genealogy mixed together?  Television Blend is reporting that Christopher Guest (The Princess Bride, Spinal Tap, etc.) is collaborating with Jim Piddock on a new series called Family Tree.  They've brilliantly tapped actor Chris O'Dowd, IT Crowd's lanky nerd Roy, and most recently the love interest in the hit movie Bridesmaids, to play the lead.

According to an article published in the Vulture, "for Family Tree, described as 'an improvised genealogy comedy,' the comedy actor will play a man in search of his real family."

It appears that writer-director Guest boasts a family tree that leads back to British Royalty, which seems like a background ripe for story lines for a new series.  We can only hope that family history will play a role beyond the title.

If Netflix failed to suggest the IT Crowd to you, chances are you don't watch The Office much. But computer geeks and techno-phobes alike will roar at the four available seasons (Americans must translate the British term "season" into extended but brief vacation").  O'Dowd holds his own against Richard Ayoade who steals nearly every scene with his socially awkward Maurice Moss character. This is one series I never tire of watching!  (Already a fan? Have you checked out the free "IT Sound Board" app for iPhone???)

Stay tuned to this blog and the Genealogy Gems Podcast for updates on the new series.

It's good to see genealogy becoming main stream enough to warrant a sitcom. I look forward to it.

BTW, Netflix has suggested the IT Crowd before but I have largely ignored it. I'll have to watch an episode or two on your recommendation, Lisa.