To be honest, when I first heard about Archives.com I wasn't sure what to make of them.  The site almost had a "phishing feel" to it, and the vague responses to my inquiries just added to my lack of confidence.  And I wasn't alone.  Many genealogists were scratching their heads and wondering who they really were.

So it comes as somewhat of a relief to see Archives.com making their big move today with their announcement that they are adding the U.S. Census to their website in partnership with FamilySearch.  In actuality they made their big move when they brought FamilySearch veteran Anne Roach AG®, CGSM on board as Director of Content Development. It was clear that they were getting poised to pounce on the industry. 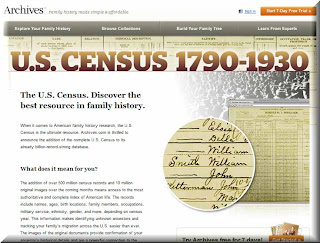 According to their press release, the "U.S. Census collections were made available by FamilySearch International, the world’s largest genealogy organization, as part of a joint effort to introduce more records to family historians worldwide. In conjunction with the Census effort, Archives will also embark on a joint project with FamilySearch to digitize tens-of-millions of additional historical records, the majority of which are not currently online." Archives has pledged a minimum of five million dollars to the project.

This answers the big question many have wondered since Archives.com launched in July 2009: Would they digitize original documents and host them on their site? Up until now it has appeared that the majority of the content was coming from other sources, some of which are free from other sites. This created a perception that their mission was to be more of a portal than a content provider, which didn't sit well with some genealogists. And it was hard to imagine anyone taking on Ancestry because they are already so far out in front.

But as the saying goes "Content is King" and Archives.com is making a move I'm sure they hope will put them in the line of ascension.

Archives.com's competitive edge is it's current low price compared to Ancestry's subscription rate. Monahan continued, "adding the U.S. Census and other unique collections as part of this initiative with FamilySearch will be a game changer.”

Archives.com has integrated the full set of U.S. Federal Population Census indexes from 1790­ to 1930 consisting of over 500 million names along with 3 million images from census years 1850, 1870, and 1900. In the near future, they say the full set of census images will be accessible.

While Archives.com has a long way to go to match the volume of Ancestry's content, a bit of competition may be very healthy for all concerned, and hopefully will mean more records for family historians.  We'll have to wait and see who will reign supreme.
Posted by Lisa Louise Cooke at 9:18 PM

This is such great news. Thanks for sharing your thoughts on it, Lisa.

Thanks Lisa! And everyone needs to make sure they add the S to archives...and go to .com site. So that's archives.com :)