Why Should Lou Dobbs Care? 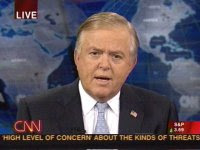 I’m definitely a night person. About ten o’clock I often get a second wind and find the later evening hours my most productive and creative. So I almost never see any of the late night shows. However, my daughter Vienna often records Late Night With Conan O'Brien and watches it during the day. She told me about a recent interview Conan did with Lou Dobbs of CNN, and how the conversation turned toward genealogy. (Wed. Jan. 16, 2008)

Vienna said that Lou commented that ethnic holidays such as St. Patricks Day were “silly”, and that he had absolutely no use for knowing where his grandparents came from. Thank goodness for the Internet. Within a few minutes I had pulled up the episode at the NBC website, and was able to see what she was talking about.

Sure enough the man who CNN’s website declares to be “an independent populist and the leading media advocate for working men and women, their families, our middle class and the American way of life” has no use for American heritage.

When Conan declared Dobbs the “face” of the immigration debate, and then reminded Dobbs that he has stated in his book that he is against days like St. Patrick’s Day, and Columbus Day, declaring that he is worried that they are damaging the country, Dobbs reply was succinct:

“Sure. I think it’s a silly idea. In 2008 in my opinion, we should be celebrating our similarities and commonalities rather than lurching along with (these traditional ideas.) The idea that because they are traditional we should have these (holiday) days, does not necessarily make them a good idea.”

Why should Lou Dobbs care?
I hope that you will take a moment to comment on this question. As a genealogist, it’s likely one you’ve already thought through for yourself. It’s obvious that there are some folks out there who would benefit from hearing your thoughts on why we should care who are ancestors were.

And here’s a genealogy sleuthing challenge for you: Just who were Lou Dobb’s grandparents (and even better his great grandparents?) Email me to share your findings and I will feature the results in an upcoming blog posting.

And how did Conan O’Brien respond to the abolition of St. Patrick’s Day?

"why we should care who OUR ancestors were"?

For the same reason we care who our parents, spouse, children, and grandchildren are -- BECAUSE WE ARE FAMILY. (As Stitch would say.)

btw, Lou Dobbs' parents are Frank and Lydia Mae Hensley Dobbs. I haven't yet figured out who their parents are.

ancestry world tree with info about Frank Dobbs side of the family. Nothing on Lydia Mae Hensley.